Why Calgary is different 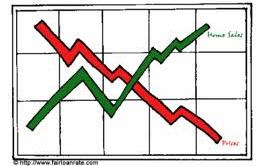 Mike Fotiou’s recent post has prompted me to offer a theory about the uniqueness of the Calgary real estate market. Calgary is the one and only city in Canada where the market has been relatively stable, with prices holding steady or increasing slightly this year. Over the past five years we’ve had small ups and downs, but the price has never fluctuated by more than 6.7% from year-to-year at the end of December.

Calgary is also the one and only city in Canada that’s had detailed and relevant housing statistics since 2006. Sellers and buyers have been able to make well-informed decisions about buying and selling based on the wealth of data that’s only been available here. Is there a correlation between good information and a stable housing market? Maybe.

My blog gave a balanced view with data and articles on all sides of the debate. While no one can predict the future, it enabled buyers and sellers to closely examine all sides of the issue, and think things through carefully before making decisions. In Feb 2007 I was the first realtor to publicly state that we could expect a correction, which did occur a few months later.

It all started with my website back in 2006 and Mike took it to a new level a couple years later. Consistent with the old saying that “a rising tide lifts all ships,” CREB started fine-tuning their statistics and now offer incredibly detailed and timely information. As Mike accurately states, “I don’t know of any other real estate board in Canada that provides such in depth real estate statistics and on a daily basis.”

The downside of being a leader also means being a target. I was the subject of many disparaging and malicious comments on the bubble blogs, most of which no longer exist.  The same people who complained about a lack of transparency were the first to ridicule and defame me for giving the straight goods, simply because it didn’t fit with their agenda of a big crash. None of the “crash-sites” were even remotely accurate in their  predictions for this market.

It’s pretty common to hear other blogs complaining about the information they get from the various real estate boards across Canada, with the exception of Calgary.

The March median price will break all previous records. It’s surprising to see that sales are up considering the inventory shortage. 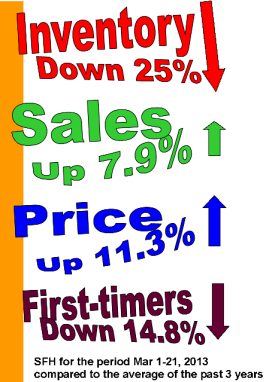 Bidding wars have returned to Calgary with a vengeance. Over the past three days, 21% of the homes sold in Calgary went for list price or higher.

Calgary truly is different. We’re rated as the best place to live in Canada. Calgary ranked top Canadian city in which to live

I’m glad you asked. Garth Turner(GreaterFool.ca) has been telling us not to buy a house since 2008. If you live in Calgary and took his advice, here’s how it would have turned out. Furthermore, in the past, you would have had a nice selection of homes to choose from, but with today’s miniscule inventory, you can’t be choosy.

Seven months ago, this prediction for Calgary from Garth Turner at GreaterFool.ca: “That the Calgary market will crack is a given…It’s different here, until it isn’t. Which is soon.”

The average price has risen $45,000 since he made that guess. Any thoughts on what he meant by “soon?”

There was a lot of consternation in February when Calgary’s sales were down by 6%. Many were jumping on the crashwagon, saying that Calgary had finally succumbed to the same fate as Vancouver and Toronto.  Now in March, compared to last year, they are up 2.7% and compared to the 3-year average, they’re up 7.8%.

Bidding wars have eased up slightly with only 10% of homes selling for list price or higher over the past 3 days. First-time buyers are seemingly being priced out, which in turn should help to moderate the price increases. The inventory shortage is still the overriding concern, however.

Fitch Ratings Agency, in a report prepared to determine potential losses on pools of residential mortgages, says Alberta is sitting pretty compared to most other provinces.

“Actual nominal [price] declines could range from the low single digits for Alberta, up to more than 15 per cent for B.C. and Quebec over the next several years assuming values start falling immediately and taking into account inflation and other market dynamics…

Among the four largest provinces, Alberta is the least overvalued because it already went through a house price correction when crude oil prices fell in 2008, and prices have not returned to their 2007 peak.”

What happened in February?

Even with inventory down by 25%,  sales were still up by 3.8% in Feb compared to the average of the past 3 years.